A hole in the can may provide better canned food 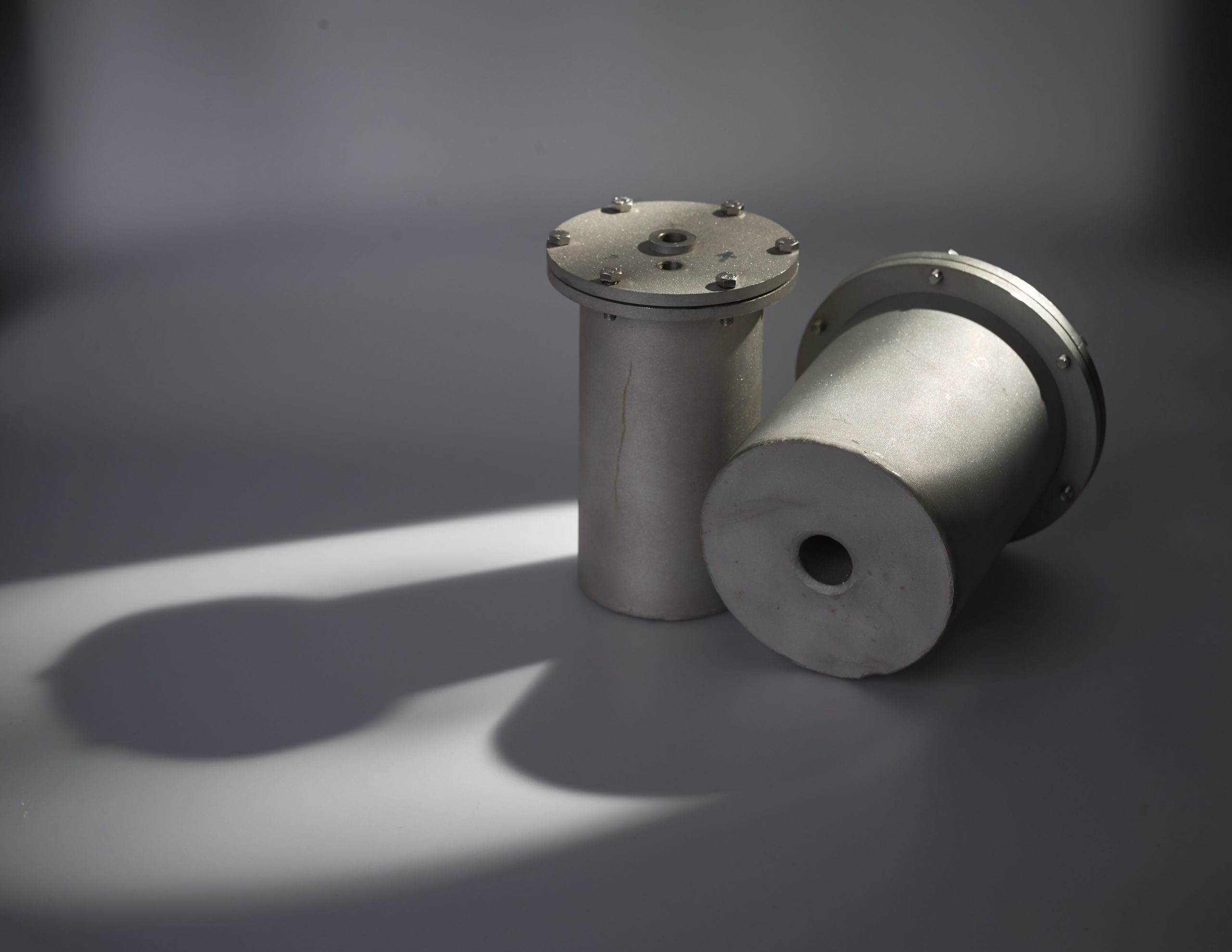 Prototypes of cans with a hole in the middle are now being tested in several European research institutes. Photo: Audun Iversen /Nofima

Canning is a sustainable way of storing food, but the method requires a lot of energy and water and can affect food quality. A newly developed can with a different shape may be the solution that makes canned food of the future more attractive.

The can looks like a regular can with a hole in the centre, and still only exists as a prototype in the laboratories of European food scientists. The new shape means it can be heated from both the outside and the inside, it provides a better quality of food and the process uses less energy. Therefore, manufacturers will be able to save both time and electricity costs and sell a better product to consumers.

However, senior scientist Dagbjørn Skipnes in Nofima says that the metal can is still relevant.

“The hermetically sealed can is old technology, but it is very environmentally friendly. The metal is 100% recyclable, in contrast to many of the alternatives”, says Skipnes.

In order to kill all the bacteria, the metal cans are heated in a pressure cooker (autoclave) before being sent out to the shops. All types of food are affected when exposed to high temperatures. One of the challenges regarding the round metal cans is that it takes some time before the food in the core of the can reaches a temperature high enough to guarantee food safety. This is because the heat penetrates from the outside and moves inward toward the coldest area. The food that is located at the outermost parts of the can is exposed to heat loads for longer periods than it actually needs. Therefore, quality loss can occur, or the product may even get burned.

Scientists are trying to do something about this. In a European research project, they are investigating a totally new hermetically sealed can concept.

The idea first came from Turkish scientists: What if we could heat the food not only from the outside of the can, but also from the inside? 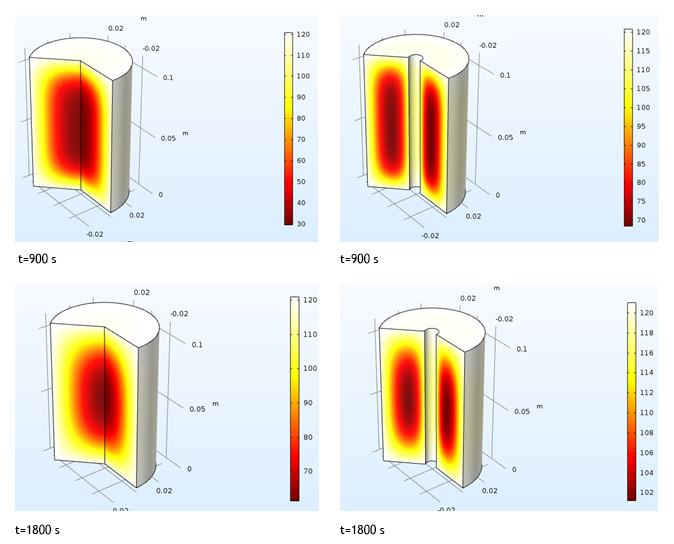 The scientists started working on mathematical models and simulations of heat transfer rates in a can with a hole in the middle. How would the heat spread in the can when it comes from both the outside and from the middle? The mathematical form is called torus, and cylinders of this shape are called toroids – hence the name toroid cans, which scientists have called the newly developed can. The simulations were promising, and the scientists developed prototypes to undergo trials with different types of food.

The advantages of a hole in the middle

The first prototype was custom-made for pineapple rings and was tested at Mersin University under the direction of Professor Ferruh Erdogdu, Turkey, with promising results, and improvements were tested at Ankara University.

This year, the can has undergone further testing in Ankara and also by food scientists in Belgium. Scientist Bart van Droogenbroeck at the Belgian research institute ILVO developed new toroid can prototypes in several sizes, and has conducted experiments including potatoes, black salsify, tomato based mushroom sauce and tomato soup with vegetables. During the experiments, the prototypes were tested alongside regular cans in order to compare the results. 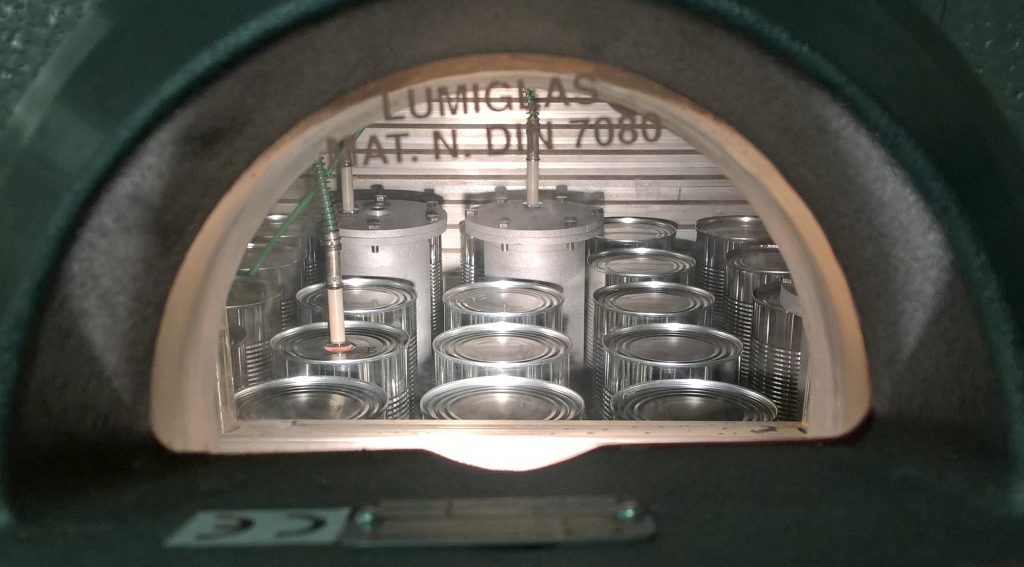 The prototypes were tested in an autoclave together with regular cans. Photo: Bart van Droogenbroeck, ILVO

“The toroid cans produced the best results when used to contain purées, sauces and soups. These were heated up much quicker, almost twice as fast”, says Van Droogenbroeck.

There was less of a difference regarding the samples of canned vegetable chunks. The new can still heated up faster, but not as much. Studies on food quality are now taking place.

“Common to all products was that the colour and appearance of the food in the toroid cans improved. The effect also depends on the recipe of the food product in the can”, says Van Droogenbroeck.

As expected, the movement of the can in the end-over-end mode further improved the speed of the heat transfer, resulting in a shorter processing time.

Shaking is next in line

Next year, Nofima in Norway will pick up the baton. There, the new cans will be tested in a pressure cooker where the cans are shaken at the same time as they are heated up. This is to see if the heating time can be further reduced and preserve as much quality as possible of the food product.

“Through international cooperation, we can share perspectives and experience, and benefit from each other’s skills and equipment. In this way, we can conduct investigations that we wouldn’t have been able to manage on our own”, says Skipnes.

The scientists from Turkey, Belgium and Norway are collaborating with Swedish and Spanish scientists in the EU-funded research project called InProVe, where the goal is to contribute to a more sustainable utilisation of raw materials in the potato and vegetable industry.

“The sale of canned food on a worldwide basis is still huge. If we can get even more taste and nourishment in this food with the toroid can, it will be a great step forward for both the food industry and consumers”, says Skipnes. 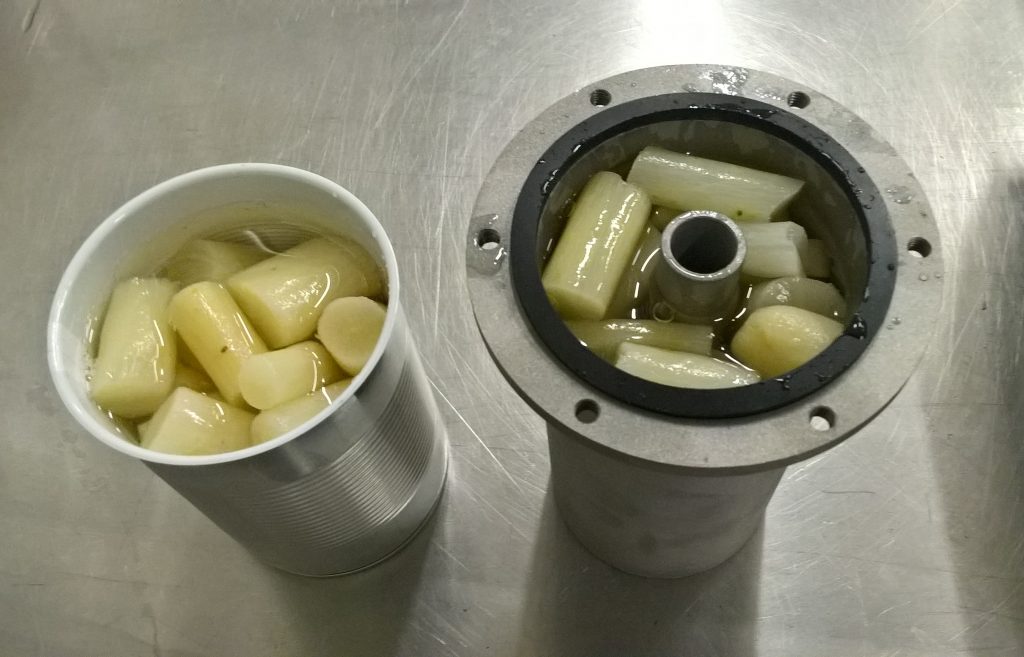 The food inside the toroid can, in this case black salsify, heated up faster than in the regular can, and even more when it was rotating while heating. Photo: Bart van Droogenbroeck/ILVO

The hermetically sealed can of the future?

Currently, the technology isn’t available for food manufacturers because can manufacturers still don’t have the equipment to make the cans with a hole in the middle.

“There are still some challenges remaining regarding sealing the cans. In addition, we still don’t have an overview of how the manufacturing of the toroid cans, including extra metal needed, will affect costs. Sealing the cans in an industrial process line will be another challenge”, says Ferruh Erdougdu, professor at Ankara University.

There is also the question of whether it is going to be made in metal at all. A can with a hole in the middle can also be made from other materials. And how can a can like this be filled? Equipment for this has not yet been developed.

“The most interesting thing about this innovation is the geometry, that the can has a hole in the middle. This will be especially useful when it comes to large hermetically sealed cans; those that large households might buy, for example. They will experience a big improvement in the quality of the food they serve”, says Skipnes.

The scientists believe that there is every reason to be optimistic about the future of canning.

“In terms of food safety in a world of explosive population growth, this method of preserving food is absolutely something to pursue”, says Skipnes.

Toroid cans – An experimental and computational study for process innovation